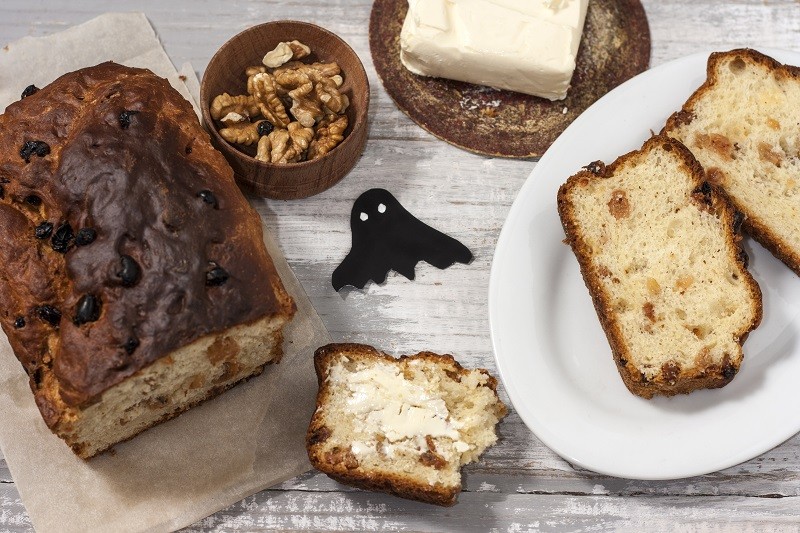 Barmbrack is the center of an Irish Halloween or Samhain custom. The Halloween Brack traditionally contained various objects baked into the bread and was used as a sort of fortune-telling game. In the barmbrack were: a pea, a stick, a piece of cloth, a small coin (originally a silver sixpence) and a ring, maybe a claddagh ring. Each item, when received in the slice, was supposed to carry a meaning to the person concerned: the pea, the person would not marry that year; the stick, would have an unhappy marriage or continually be in disputes; the cloth or rag, would have bad luck or be poor; the coin, would enjoy good fortune or be rich; and the ring, would be wed within the year. Other articles added to the brack include a medallion, usually of the Virgin Mary to symbolize going into the priesthood or to the Nuns, although this tradition is not widely continued in the present day.

The Irish 'lucky' ingredients: (can be a choking hazard for small children)
'gold' ring, to foretell marriage within a year
small coin, to forecast wealth
small piece of cloth to forecast poverty
little piece matchstick to forecast the husband will beat his wife
thimble to forecast spinsterhood
button to forecast bachelorhood

Method:
Wrap each 'lucky' item carefully in wax paper.
The trick to making a Barm Brack like soda bread is the soaking of fruit overnight in the
tea. While this makes the dried fruit softer and more appealing in general,
one must be careful when mixing the dough not to over-knead or the
re-hydrated fruit will crumble. Add the sugar and egg to the fruit mix the next day. Sift in the remaining dry ingredients. Mix gently. Stir in the wrapped 'lucky' items and try to distribute them evenly. Use a 7" round
baking tin at 350Â°F for 80 minutes. Cool on a wire baking rack.

The Brack can be made a week in advance and stored in an air-tight
container. It is traditional that only he/she who has baked the cake should
cut and serve the slices, as only he/she may know where are the 'lucky'
items and will distribute them equitably!!