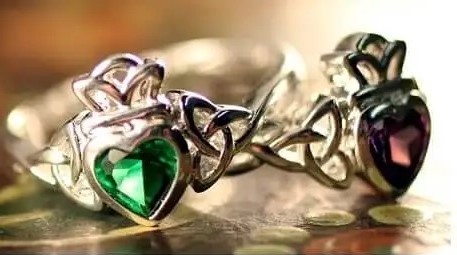 The Claddagh ring meaning is all about the strength of eternal love. Â

Steeped in tradition, the meaning of the Claddagh ring has varied throughout the years for the wearer. The ring can be worn on different fingers or hands, depending on oneâ€™s relationship status.

The Claddagh Ring, without a doubt is one of Irelandâ€™s most famous symbols of heritage. The Claddagh Ring has become a symbol of Ireland. The claddagh symbol depicts two hands gentle holding a heart that is adorned with a royal crown. It symbolizes the strength of a relationship, bound eternally in friendship, love and loyalty. The wearing of the Irish Claddagh ring is a tradition, rich in symbolic meaning and history.

The Claddagh Ring has become a worldwide symbol of Irish culture and heritage loved by all nationalities.

What is the claddagh ring poem?

As you might have heard there is an old Irish saying about the claddagh ring. "With These hands, I give you my heart and crown it with my love."

Claddagh Rings are world renowned, and are worn by both men and women, single or taken. Irish Claddagh rings are named for the ancient fishing village of Claddagh, near Galway, Ireland, dating back to the 17th century. The Claddagh ring in Irish is fÃ¡inne Chladaigh and is a traditional Irish ring which represents love, loyalty, and friendship. The hands represent friendship, the heart represents love, and the crown represents loyalty. The Irish Cladddagh ring, as currently known, was first produced in the 17th century.

Richard Joyce & the story of the Claddagh Ring

The Claddagh Ring is an old Irish ring with two hands holding a heart, surmounted by a crown. According to Irish heritage, the claddagh symbolizes love, loyalty and friendship. The hands represent â€˜friendshipâ€™, the heart represents â€˜loveâ€™, and the crown represents â€˜loyaltyâ€™. Imagine Ireland in the days long ago when a young man named Richard Joyce was captured and sold into slavery from the fishing village of Claddagh off the coast of Ireland. Can you imagine how many years passed while Richard Joyce wondered if his true love waited. As the years wore on he stole tiny bits of gold from his master to make her a ring. He fashioned a heart for love, a crown for loyalty and hands holding heart as a symbol of friendship. Can you just picture the tiny first claddagh ring being made? After many years he returned home to the village of Claddagh Ireland. To his magical delight he discovered his true love had waited for him. He gave her the ring as a symbol of love, loyalty and friendship forever known now as the Claddagh Ring.

What are Claddagh Rings?

The Claddagh ring is really a fede rings and have a long history dating back to Roman times. The name "fede" derives from the Italian phrase mani in fede meaning loosely "hands joined in faith" or "hands joined in loyalty". The clasped hands were viewed as promise ring used as an engagement ring or wedding ring in medieval and Renaissance Europe. The Irish Claddagh ring is a version of the fede ring has roots deeply seeded in long standing Irish tradition

The gaelic spelling of the word tells us that 'Cladach' was originally pronounced [klad-ukh] and sounded out with a hard, guttural ending common to Irish words. The word is now more commonly pronounced without the 'gaelic touch' as [klad-uh]. 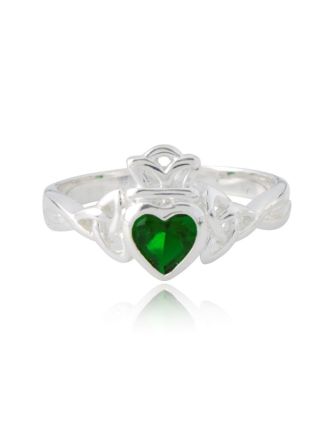 Add to Wish List Add to Compare
Trinity Claddagh Ring
As low as $69.99