What is Saint Patrick's Day and why do we celebrate it?

Who was Saint Patrick?

Saint Patrick was a Christian missionary and is regarded as the patron saint of Ireland. St. Patrick lived from AD 373–493, and ministered in Northern Ireland from AD 433 until his death. Pious legend credits Patrick with banishing snakes from the island, though post-glacial Ireland never actually had snakes. It is suggestion is that snakes referred to the serpent symbolism of the Druids. Saint Patrick is also credited with teaching the Irish about the Holy Trinity by showing people the shamrock and a three-leaved clover. Legend also says St. Patrick, while preaching Christianity, drew a cross through a Celtic circle symbolic of the moon Goddess. Hence the Celtic cross was born. Today the circle of the cross is viewed as a of God’s endless love. 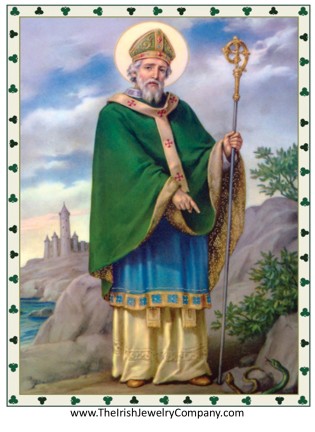 May the leprechauns be near you,
To spread luck along your way.
And may all the Irish angels,
Smile upon you on St. Patrick’s Day.

There is an old Irish Blessing

For each petal on the shamrock this brings a wish your way. Good health, good luck, and happiness for today and every day.

Why do we wear green on St Patrick's Day?

Old Irish folklore says that wearing green makes one invisible to mischievous creatures like leprechauns, fairies who pinch those not wearing the green.  As a matter of superstition people began pinching anyone not wear green as a reminder that leprechauns were lurking about.

Saint Patrick’s Day is upon us.  So get out your sack of spuds and get cooking. Corned beef and cabbage is fabulous but, until Saint Patrick Day is declared a national holiday, you’ll probably not have time cook such a fine meal. My advice is any kind of beef will do, but for the love of god, you have to have loads of spuds! The spuds are a staple Irish food and they make a nice starchy base before hitting the pubs.

Did you know Saint Patrick was a great storyteller and preacher? Saint Patrick’s Day is the perfect time to get your blarney on whether you’re Irish or not. St. Patrick’s Day isn’t just about drinking the legal or illegal limit of a thick and hearty Irish brew; it’s about making new friends. That should be easy, since as Irish men we have been blessed with the gift of the gab. So I highly recommend striking up a conversation with someone and if you’re not Irish find an Irishman to talk to on St. Patty’s Day. As you know, we Irishmen love a good story and we Irishmen never tell a lie. Well, least not when we’re sober but after we’ve had a few pints we start spinning the blarney for sure.

Us Irishmen, we are a proud bunch and we love to boast about our cultural contributions. May I suggest that you brush up on Irish quotes from Irish poets and authors like Oscar Wilde, James Joyce, Yeats, Shaw, and Jonathan Swift. And it couldn’t hurt to read Thomas Cahill’s book “How the Irish Saved Civilization.”

Your might want to rest up your vocal cords as well. Upload on your iPod a week before St. Pat’s some Irish favorites like U2, Van Morrison, Saw Doctors, Dropkick Murphy’s, and The Pogues. We Irish love to sing and we all think we are really good at it after having a pint or two. But whatever you do, do not start singing Danny Boy or else you be ending your evening early.

On Saint Patrick’s Day there is nothing more sacred then “the wearing of the green” meaning to wear a shamrock on one’s clothing or to wear green clothing is symbolic of the shamrock. Saint Patrick used the shamrock, a three-leaved plant, to explain the Holy Trinity to the Celts. The shamrock has since become a symbol of Ireland and good luck. So make sure you are wearing green on St. Patrick’s Daylest you be pinched by a mischievous Leprechaun.

So on that note, I wish you a successful St. Patrick’s Day. After all, “Success is a science; if you have the conditions, you get the result”—Oscar Wilde.Remember everybody is Irish on St Patrick’s Day, but only a few of us are lucky enough to be Irish all the time. So may your joys be deep and many, may your heart be light and glad, may you have the best St Patrick’s Day that you have ever had.